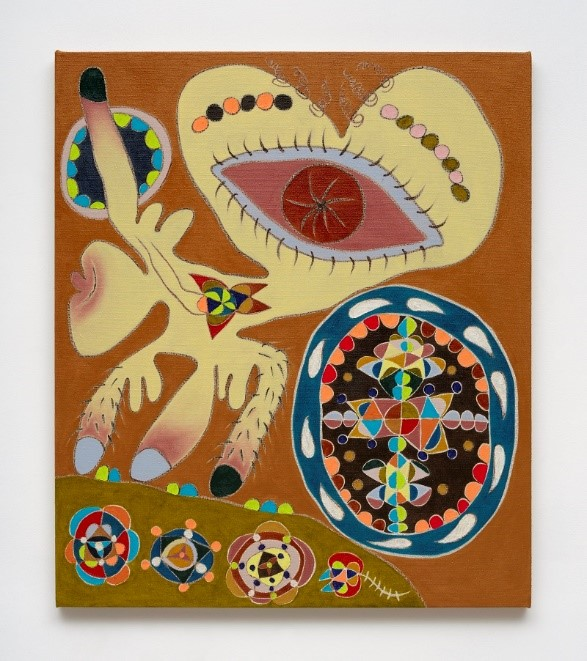 Working in oil, pastel, and graphite, across both canvas and paper, Hantehzadeh brings together freewheeling figurative elements in vibrant and arresting compositions that allude to a range of references, including Paleolithic cave paintings and indigenous art from Mexico to Islamic architecture and ancient Persian rug patterns. Hantehzadeh’s work often reflects her particular interest in Mayan and pre-Islamic art and artefacts, occasioned by evidence of matriarchal and gender-fluid practices that existed in these cultures prior to European colonization. Embellished orifices and sexual organs proliferate Hantehzadeh’s work, transfigured from the corporeal to the otherworldly in an earthy palette that complements her biomorphic and abstract forms. Hantehzadeh’s work draws on both personal and collective memory, with particular focus on liminal states of being. The artist returned to the United States – her country of birth – after being raised in Iran until early adulthood and her deeply personal works reflect this cultural duality in the hybrid forms that occupy her paintings and drawings. Nasim Hantehzadeh lives and works in Los Angeles. She studied a BA at the University of Tehran Center for Art and Architecture in 2007; in 2013 she received a BFA from the School of the Art Institute of Chicago; and an MFA from the University of California, Los Angeles, in 2018. She has received the Resnick Grant, the D’Arsy Hayman Grant and the Pollock-Krasner Foundation Award. Collections include Frederick R Weisman Art Foundation; Dieresis Collection, Guadalajara; GAIA Collection, Mexico; Isabel y Agustín Coppel Collection, Mexico; and Lynda and Stewart Resnick Collection.