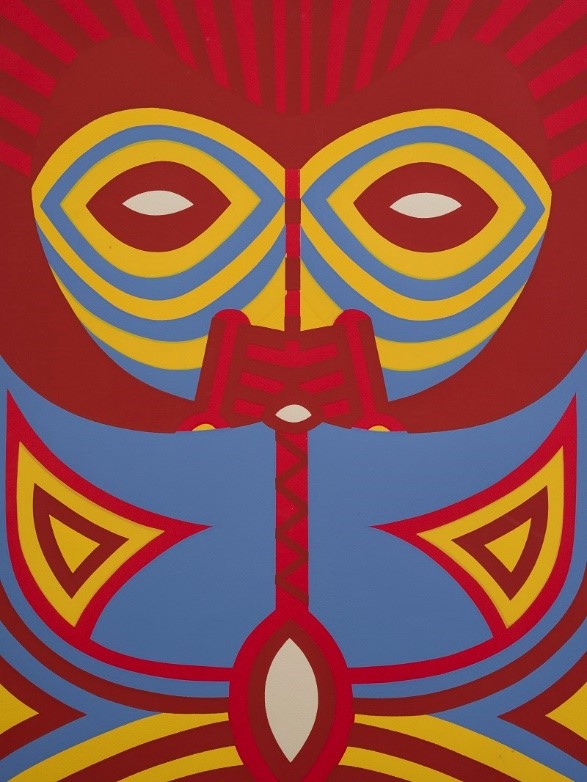 I have also been very fortunate to spend most of my artistic career painting in the far-flung corners of the globe and my journeys have been a major inspiration for my paintings. It also has been a tremendous learning experience that has made me acutely aware of the difficult lives many women lead in Africa, Asia and Latin America. Being a woman of color, I also became more sensitive to the less than equal treatment of both women, and people with darker skin throughout the world. This has also made me appreciate how very fortunate I have been as a woman to be brought up in the Philippines, educated in America and live all over the world. – Pacita Abad

Created in the first year of her series of the same name, this print exemplifies the vibrant colors and dynamic geometry of her Bacongo series. The mask-like Bacongo works get their name from the Kongo or Bakongo people, the Bantu ethnic group in Central Africa that inspired her. Abad traveled extensively throughout Africa, Asia, and South America with her husband, a development economist working for the World Bank. During this time, she created her trapunto paintings, canvases she could easily transport that would include painted, sewn, and stuffed sections, existing between wall hanging, painting, and sculpture. Abad worked as a seamstress while attending University of San Francisco, which she attended after being forced to leave the Philippines because of her political activism against the Ferdinand Marcos dictatorship. A global artist, Abad’s work is included in public and private collections in over 70 countries.