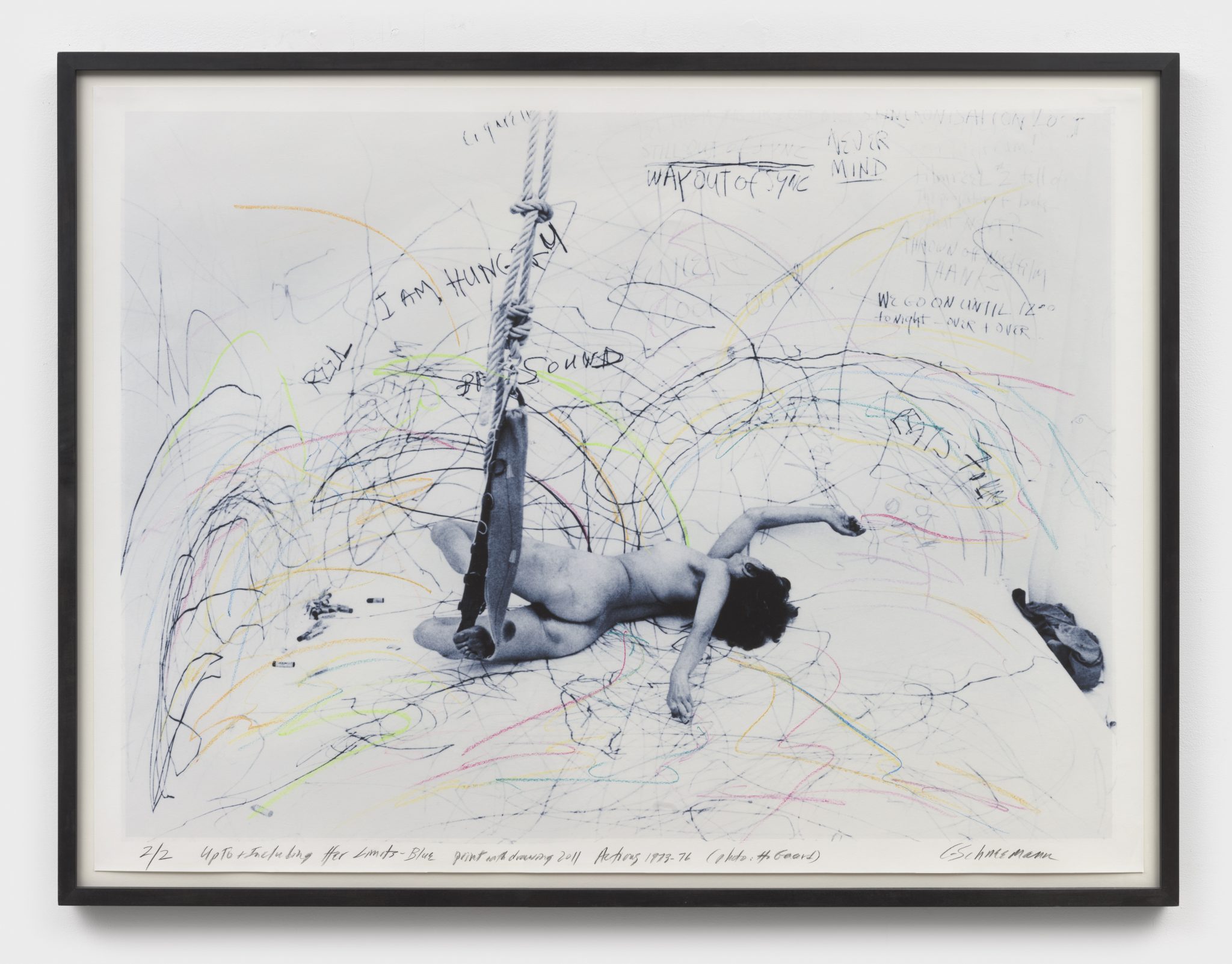 A pivotal figure in performance art and Feminist Art in the 1960s and 70s, Carolee Schneemann originally trained as a painter at Columbia University and Bard College in the 1950s and has always considered herself a painter first. Between 1971 and 1976, Schneemann performed Up to and Including Her Limits nine times. Schneemann describes the work:

Up to and Including Her Limits was the direct result of Pollock’s physicalized painting process. In Up to and Including Her Limits, I am suspended in a tree surgeon’s harness on a three-quarter-inch Manila rope, a rope which I can raise or lower manually to sustain an entranced period of drawing – my extended arm holds crayons which stroke the surrounding walls, accumulating a web of colored marks. My entire body becomes the agency of visual traces, vestige of the body’s energy in motion.

Schneemann conceptualized the project in reaction to Jackson Pollock’s “action paintings,” inserting herself into the largely male genre by pushing the act of creation to the extreme, bound within her own female form. Schneemann’s work often collapses the personal with the political, including her renowned and provocative works Meat Joy and Interior Scroll. Her work has been widely exhibited, including her 1997 retrospective at the New Museum, New York. In 2017, she was awarded the Golden Lion for Lifetime Achievement at the 57th Venice Biennale. Her work is in numerous collections worldwide, including the Whitney Museum of Art, New York; Tate, London; Centre Pompidou, Paris; Hamburger Bahnhof Museum, Berlin; Hirschhorn Museum, Washington D.C; Institute of Contemporary Art, London; Institute of Contemporary Art, Chicago; Museum of Modern Art, New York; Moderna Museet, Stockholm, Sweden; Perez Art Museum, Miami; The Walker Art Center, Minneapolis; Philadelphia Museum of Art; San Francisco Museum of Modern Art; and Reyjavik Art Museum, Reyjavik, Iceland.