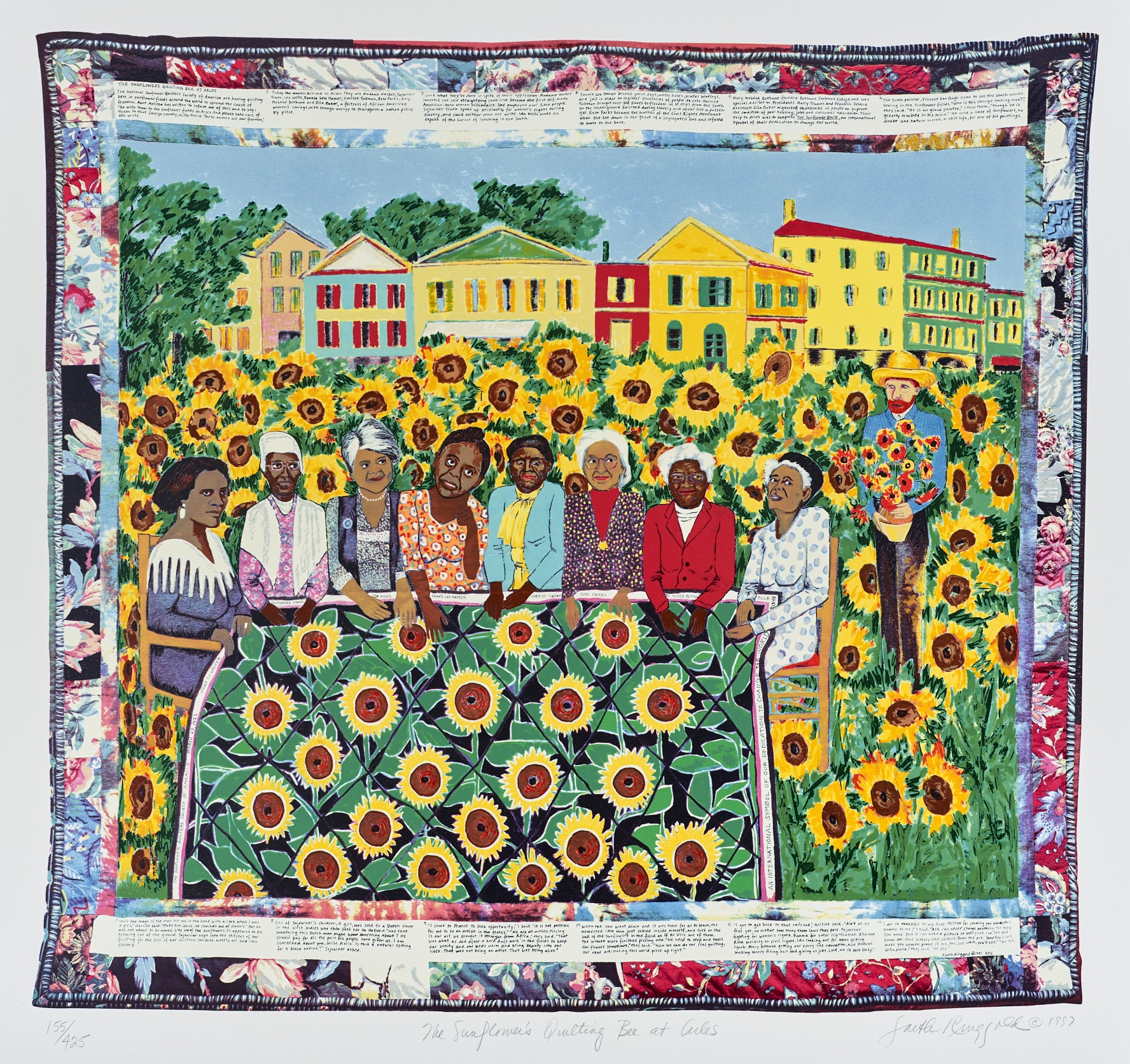 Art is a form of experience of the person, the place, the history of the people, and as black people, we are different. We hail from Africa to America, so the culture is mixed, from the African to the American. We can’t drop that. It’s reflected in the music, the dance, the poetry, and the art. – Faith Ringgold

Born in Harlem, New York, Faith Ringgold has produced artwork that tells and re-tells historical narratives and realities influenced by her own personal history and the history of black people in America. From Folk art to Outsider art, historical art to contemporary, Ringgold’s visual language has taken on many forms, using many different materials to do so. Children’s books, paintings, quilts, prints, and tankas make up just some of her preferred media. The Sunflower Quilting Bee at Arles is a silkscreen based on a 1991 work made of acrylic on canvas with pieced fabric border. In it eight historical African American women – Madam Walker, Sojourner Truth, Ida Wells, Fannie Lou Hammer, Harriet Tubman, Rosa Parks, Mary McLeod Bethune, and Ella Baker – are gathered in the communal act of making a quilt in the French setting made famous by Vincent van Gogh, who stands by attentively holding flowers for the women. Groovin’ High is a silkscreen based on a 1986 work made of acrylic on canvas and tie-dyed, pieced fabric border. Titled after Dizzy Gillespie’s 1945 jazz hit, the work was inspired by Ringgold’s memories of Sunday afternoon dances at the Savoy Ballroom in Harlem. Since the 1980s, many of Ringgold’s works take the form of a story quilt – seen in the pattern, border, and geometry of these pieces – and the artist is known for bringing a contemporary, political power to the art form’s historical associations of female labor and storytelling. Ringgold’s artwork is in collections of The Metropolitan Museum of Art, MoMA, the Whitney Museum, the Guggenheim Museum, Brooklyn Museum, and The Studio Museum in Harlem, all in New York; The National Museum of American Art, Washington, DC; Art Institute of Chicago; and Boston Museum of Fine Art. Ringgold’s first New York retrospective, American People, will take place at the New Museum in 2022.