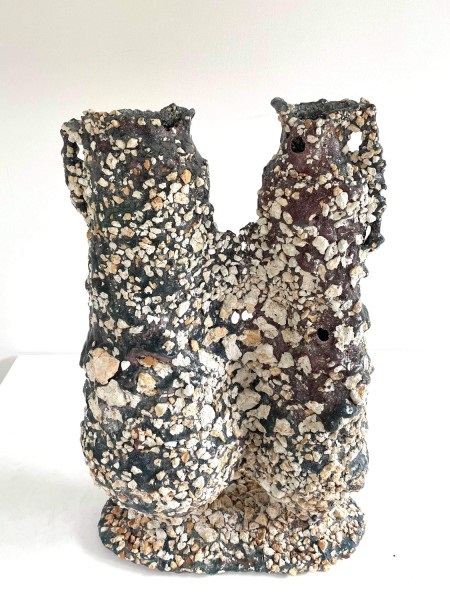 As a student, Masaomi Yasunaga followed in the footsteps of the Sodeisha group (1948-1988) – an avant-garde ceramic group that rejected the discipline’s traditional notions of functionality, leaning towards clay’s more sculptural possibilities. In The Japan Times, Robert Yellin described Sodeisha:

They had as their unwritten laws that they would not submit work to official exhibitions, to avoid being judged on others’ criteria, and not to copy antique wares of the past. That was the basic credo, quite bold and naive. A major hurdle in the beginning, believe it or not, was whether or not the mouth of a work should be closed or not – if left open it gives the feeling of a common vessel, and thus to close it was the only way to have it taken seriously as ceramic sculptural art.

Among Yasunaga’s many experiments with clay are his burned white porcelain objects; his works that are not technically ceramic as they are solely made from glaze that normally covers the clay; and his inclusion of nontraditional metals and minerals in the work. Melting Vessel, like many of his objects, exudes a primal energy that is rebellious and coolly elemental. Yasunaga has a Masters Degree in Environmental Design from Osaka Sangyo University. Solo exhibitions of his work have been held at galleries in Japan, Canada, and the US. His work is included in the permanent collections of the Ariana Museum, Geneva, and The Museum of Fine Arts, Houston.